For those of us who did not find a vocation for it early in life, it is all too easy, as we grow older, to draw a definitive line between the 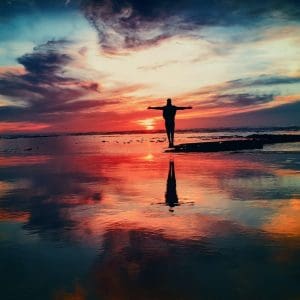 ‘practical’ world – the one we live in, interact with, and understand – and the realm of scientific theory, precision, and jargon.

And, for the most part, this needn’t be a stumbling block in our daily lives. We watch the leaves change in the fall, not the breakdown of chlorophyll; we can bake a loaf of bread without reeling off a lengthy explainer on the formation of CO2 and C2H6O; we can wake up and know whether or not we have had a good night’s sleep without analysing electroencephalography for brain activity.

In essence, when it comes to our individual ways of perceiving the world, the scientific and practical realms can often be separated without altering our habits, routines, and behaviours.

The same could be said for someone who protects themselves against electromagnetic frequencies – they will, of course, feel the benefit as a wide range of seemingly endless and disparate symptoms subside, without ever needing to understand the precise nature of the threat, or the cure.

There is one energy, however, that every single one of us experiences every moment of the day without ever understanding its primal and immense power – despite the incredible benefits a little knowledge can, and will, bring to our lives.

What is Scalar Energy?

Scalar, Tesla or Longitudinal waves are composed of zero point energy (ZPE) travelling faster than the speed of light. These waves travel through any solid object – even those effective at blocking electromagnetic frequencies (faraday cages).

Despite the fact that it is one of the most abundant and primal energies in the universe, only a small few understand the precise nature of this energy. As an invisible, seemingly passive force, it remains just as abstract to us as, say, gravity or magnetism.

It is incomprehensibly large, and the power contained within a single cubic centimetre is nigh-on immeasurable. What’s more, it represents the foundation to all healing energy – a force which has been supporting, nurturing and enriching our energetic bodies, and those that came before us, since the beginning of time itself.

It may be invisible but, just as we can observe the direct impact made by other invisible forces such as gravity and magnetism, so too can we comprehend the direct impact scalar waves are having on the living world at each and every moment. It is, at its most basic level, life energy.

The Benefits of Understanding Scalar Energy

While western science is centuries behind other cultures in terms of its understanding of scalar energy – you may, in fact, already know of this energy under the names Prana, Ki, or Qi (Chi) – it is now referred to within scientific discussion under the term zero-point energy. This is a remarkable step forward for ‘mainstream’ science, which has, until very recently, buried valuable research from those who sought to understand and harness this invaluable energy many decades ago.

Scalar energy holds an incredibly array of benefits and potential uses – from energetic healing to being harnessed as a means of protecting life on earth from volatile solar flares and chaotic activity in the future.

For any one of us, however, one of the greatest benefits stems from its utilisation within EMF protection products, which not only exist to shield us against the constant barrage of EMF radiation, but also to help promote rapid healing and to undo the damage wrought on our bodies over decades of exposure.

Electromagnetic radiation causes chaos within our energetic systems. We are bombarded with it day and night, more so than anyone who existed at any other point in human history, and our physical, emotional, spiritual and mental energetic fields are, to put it mildly, in a perpetual state of devastation.

Besides providing an energetic shield, scalar waves can be used to ‘program’  certain materials (crystals) in the Solfeggio healing frequencies. An EMF protection necklace, for instance, can be embedded with Solfeggio frequencies using scalar waves generated by a device similar to our QSB . This means that when this device is worn against the human body, the healing frequencies become available for the body to accelerate its healing journey.

As we begin to grow more and more aware of the primal energies that suffuse every part of the universe, we can begin to heal from the inhumane technological progress that has exposed us all to immeasurable stress and dis-ease. By utilising scalar energy within EMF protection, not only are we protected against the endless onslaught of EMF radiation, but our bodies can finally accept healing, rather than unremitting chaos and energetic stress.

2 thoughts on “Understanding Scalar Energy and its Benefits”