Margie, co-founder, and director of Life Energy Designs also known as Lifeenergysolutions.com  claims it is not so much a business as a way of life. She started it with husband David when they came to New Zealand from Kenya in 2003. 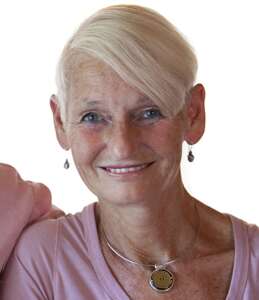 After leaving Coventry College of Art Margie became a British civil servant, in the need to earn a living, where she found she was a very round peg in a very square hole. Eventually after some years of trying to become a square peg she resigned, while her colleagues were ardently striking for equal pay. It was intolerable for  her that those dependant on state benefits were not being paid and with no money for even food were suffering as a result of this strike action. Selfish disregard for others is one of her pet hates.

Still needing to support herself Margie started her own business in fashion designing and manufacturing women’s  clothes for which she was better suited and equipped. More round hole.  Later she specialized in fashion knitwear for women, men, and children, which she was still successfully doing this when she met David.

Meeting David took her into a new and exciting, not to mention love-filled chapter of life. After marrying in 1993 they sold all their worldly goods and chattels  including her valuable antique jewellery collection at Sotheby’s in London, well where would she wear it in Kenya? Anyway, every last dollar was needed for their coming adventure.

It indeed turned out to be an adventure with the start and following success of a tourist dolphin-swim-experience business where Margie would take her turn to host their guests on their traditional sailing dhows despite not swimming because she was terrified of water! She did it because – well you just do if you have to, she says.

The fact is that David and Margie started the business enthusiastically, if somewhat naively, because they didn’t know that it was impossible. Even with no experience, knowledge, contacts, training, and minimum cash they made it possible and profitable. Proof they say that we are creators of our reality and our life. This is how Margie has always lived, some have called her impulsive she says that she is led, follows and is always taken care of.

When the realities of living in an African country kicked it with the corruption, and intimidation by police and authorities Margie and David decided that after eleven years it was time to find pastures new and a more peaceful place to live.

New Zealand’s green pastures, forests and dramatic mountains became the backdrop for another chapter and another business. Life energy Designs was born. Margie says we did it again because we didn’t have a clue that we couldn’t do it. It was hard work and money was short because the people buying their Kenyan business reneged on their payments. But like all things in life if you are going in the right direction the way just opens up.

Margie has bought to their business Life Energy Designs/Lifeenergysolutions not only her vast experience in her own businesses  but also in art, design, being a published writer and author and her skill as a coach certified by The Life Coaching Institute. Theirs is a business where people are seeking advice and solutions for not only EMF protection but for insomnia and the whole spectrum of health problems and challenges.

It was not until later in life that Margie realised that her extreme sensitivity has a name – Empath. Realising this made sense of many things she had struggled with like her connection and communication with spirit realms, her knowing things without knowing why or how, predicting, being able to feel other people’s feelings and almost being able to crawl into their skin.  For her it has been a burden and a blessing that she is learning to understand and how to cope with.

Being energy sensitive has been invaluable in what she and David do. Her abilities as an Empath means that she Margie verifies their decisions, designs and the direction the business needs to go in. Margie and David are two halves of a whole – very different but utterly complimentary. Totally meant to be and brought together to do what they are doing.