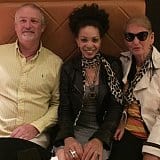 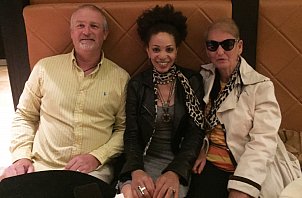 It isn’t every day the you get to meet a celeb. When did you meet one last? I think I have only met minor ones on the fame scale and that was years ago.

We see the celebrities on TV and in the glossies but haven’t a clue how much photo shopping and rehearsing has gone on. What seems so real and natural could be a smoke screen.

Cindy Blackman Santana, as a musician, is on the International fame scale right up there – at the top. She has been a customer for ages and it was always a nice thought that our products were keeping her safe, but communication was limited to automated website orders and brief emails.

On her recent tour with Santana, Carlos Santa is her husband, she contacted us about buying some Nu-Me pendants. Excited to meet her at last we agreed to meet at the hotel where she was staying in Auckland.

Straight from a flight from Australia’s Gold Coast after being up and on the beach at six that morning, it was now late afternoon, she certainly didn’t need any photo shop improvement. She is – drop dead gorgeous.

Sitting in the cavernous hotel foyer, whose interior designer had obviously chosen the wrong career, Cindy was so unpretentious, dare I say real making us feel so relaxed it was as if we had known each other forever.

David open his bag of goodies – lots of our products for her to see and feel energetically. They filled to overflowing the round marble topped drinks table. When Shaun, Santana’s security manager, came over to give her a message she introduced him to us. He had never seen our products so was curious. David offered to do the strength test with a Nu-Me pendant on him.

Now Shaun is by no means a little guy. He stands a good head above David’s six feet, but David still manged to topple him over. Shaun was shocked, after all he was the strong man of the Santa crew. Then a Nu-Me Skinny pendant was put around his neck. Despite David’s best efforts, even with two feet off the ground, while pushing down on Shaun’s clasped hands, behind his back, he couldn’t budge him.

“I want one” was Shaun’s immediate response.

Now Cindy’s eyes had widened when she saw her number one strong-arm man easily knocked off balance by David. Then to see him strengthened with a Nu-Me Skinny pendant, which were new to her, was obviously a revelation.

She hadn’t seen The Zen stones or p.e.bal before either, could easily feel the energy from them, so ordered not only herself but other family members.

We chatted comfortably for ages and it was only a text message from Carlos asking where she was that made us moves. But not until after we took a souvenir photo on Cindy’s phone. If you are wondering why I am wearing sunglasses it is because Cindy loaned them to me when we decided that I needed them more than she did, even though she had been up and travelling snice six a.m. It is also Cindy’s trendy scarf wound around our necks. Just a bit of fun!

As we parted Cindy gave us tickets to watch the Santa performance on the following night. As long-time fans, we were over the moon. We arranged to meet Shaun at the concert to deliver Shaun’s Nu-Me Skinny and Cindy’s sizeable order.

Need I say anything about Santa concert or Carlos performance, or Cindy’s drum solo? The bond between Carlos, and his wife Cindy was tangible. The music so heartfelt that it reaches the hearts of their fans with each beat. Magic.

We had a ball, sang and clapped until are throats and hands were raw, but the icing on the cake for us, was to watch big, broad Shaun doing his security stuff with his Nu-Me Skinny very visibly around his neck. With love, we hope that it will long serve him.

It is nice to know that celebs are also real people. Cindy is certainly a warm and generous real-person-celeb that it was a joy to spend time with. We are so glad that we are keeping her and hers safe and protected.

And long may the Santa magic lift our hearts, and inspire.

Be the first to comment “Protecting Cindy Blackman Santana.”