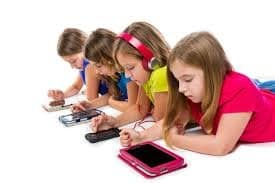 WHO – the World Health Organization has warned that our children’s health is being put at risk by the dramatic increase in screen time.

Interestingly the extensive research that led to this warning does not cover the importance that the increased exposure to EMF has on our children’s health, even though it is the singularly most important risk. This proves that we still have some way to go in the acceptance of the role that EMF radiation has on the wellbeing of not only our children but all things on our planet

The findings, although not complete in my opinion, are still very educational – and disturbing.

New research has revealed that the rise in the use of social media and the increased amount of time spent in front of computers, smartphones and tablets is causing an increased risk of poor health and suffering in children as young as 11. It also suggests that most young people are failing to take the level of recommended exercise each day.

It showed between 2000 and 2014, a continuous steep increase in the number of children using this technology for 2 hours or more each weekday. The rate of usage increased for both boys and girls but tripled for girls aged 15 or over.

42 countries were studied by the WHO and Scotland came out as number 1 for computer use by girls with Wales being 4th and England 7th.

Dr Jo Inchley from the University of St Andrews, the lead author of the study said that the rise in social media usage was having an impact on young people.

“We know that a positive impact of social media is social connectedness and the sense of interaction. But we also know there are risks, such as cyberbullying and impact on mental health, as well as things like missing out on sleep.

Also, there are longer-term impacts on physical health from being sedentary. One of the main challenges for us is that this kind of activity is so much part of young people’s lives these days, how do we manage this and the health risks associated with it? It’s about reducing time being spent sedentary, and ensuring that children still have opportunity to be active. We really need to start addressing these challenges now.”

Chairman of the National Obesity Forum, Tam Fry said that gadgets are taking their toll on our children’s wellbeing.

He said “Adolescents are now slaves to handheld devices and this is doing nothing for their health. Incredibly, teenagers believe that playing computer games with their friends from the privacy of their bedrooms is a form of physical activity and rebel if grounded from their Facebook or Instagram.”

Also found in the report is that whilst TV watching is declining, only a minority of youngsters watch less than two hours a day.

Dr Inchley said “We need to find ways to make young people more active. Maybe they are getting lifts in the car, or not playing in the streets any more in the way they used to.

This report is to be presented at the European Congress on Obesity in Porto, Portugal