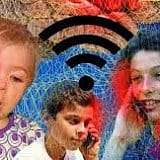 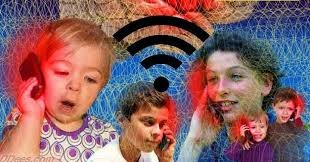 Concerns over Electromagnetic fields (EMFs) continue to grow.  The more correct name to refer to them is “electromagnetic radiation(EMF).  Whist seeming totally safe and very convenient in today’s modern world, cell phones, smart meters and other “smart” devices that rely on cell towers and Wi-Fi come at a cost to your health.

Having been linked to cancer, Alzheimer’s disease, multiple sclerosis, chronic fatigue, miscarriages and many other devastating diseaseS and health conditions, the ever growing amount of exposure we have to EFMs is what is becoming so concerning.  EMFs are almost impossible to avoid and worse still, children are even more susceptible to the EMF’s negative effects.

ANSES, which stands for Administracion Nacional de la Seguridad social is a French agency who deal with an assortment of health issues, such as food, environmental and occupational safety.  Formed in 2010, the agency recently released a report – “Exposure of children to radiofrequencies: a call for moderate and supervised use of wireless technologies.”

In their report they outlined several risk factors and notes that the WHO’s International Agency for Research on Cancer concluded recently that exposure to radiofrequencies, such as heavy cell phone usage, is probably carcinogenic.

Catherine Frompovice from Activist Post noted however “There doesn’t seem to be a specified plan to address scientifically the issues of cancer-causing potentialities regarding EMFs emitted from wireless communication devices and SARs, which impact not only children but everyone, including animals and vegetation.”

The agency instead talks about “possible effects on cognitive function and well being.”  They recommends that radio devices, especially those used by children, should be subject to the same regulations as those governing cellphone.  ANSES also suggested that exposure to EMF limits should be enforced no matter what type of device is being used.

Even though government agencies and people in general are reluctant to admit it, EMFs are extremely dangerous.

Several devices that most people will have in their home easily produce enough radiation to cause harm reports Natural News.  Devices such as computers, microwave and cellphones can  cause conditions such as poor concentration, memory loss, dizziness, insomnia, headaches and many other illnesses

So, how can we protect ourselves?  And more importantly our children?

There are a variety of nutrients that help to protect your body against the effects of exposure to EMF.  Examples of these are vitamin D3, iodine, B vitamins, zinc, selenium and omega 3 fatty acids.  It is also important to consume food with a high oxygen radical absorbance capacity such as artichokes, cranberries, red beans, pecans, asparagus, blueberries and broccoli.

Having products in your home or on your person that protect from the dangers of EMF will also help.

Limiting exposure to EMF, consuming foods that help and having product that protect against EMF can decrease the risk of the harm that is associated with these devices

Kinesiology takes the guess work out of life.

Be the first to comment “What Is EMF And How Can Exposure Effect Your Family?”