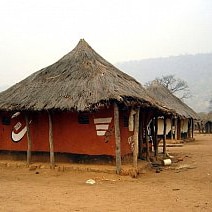 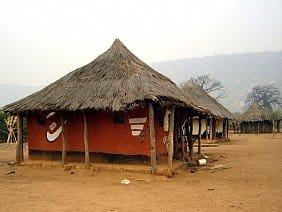 Do you ever think about craziness in this world? I try not to so that I can preserve my sanity but this thought hit me after talking to someone who had become so affected by EMF (Electromagnetic fields) that they were sleeping in a car in the middle of a field. Beside themselves, like so many others, they needed to escape the towers, pylons, Wi-fi networks and general electrical convenience of modern living for the sake of their health and wellbeing. Most of us live with it because we need to earn a living.

But in reality is there anywhere that you can run to away from electromagnetic radiation?

In an isolated native village in Africa? Well we lived in one as you may know. Being seventeen kilometers from a road it was as primitive and isolated as it gets. The buildings were mostly traditional huts – mud walls, floors and palm thatch roofs. Few had electricity and none had running water. Bathrooms were a bucket behind a palm thatch screen or a discreet corner of the one room that a whole family lived and slept in. Life was traditional, basic.

The village had one shop, which was hardly a supermarket selling from sacks of dried goods that the insects and rodents also enjoyed. It had no electricity. The bar did have electricity! The village didn’t boast much – but – it did have a cell phone tower! It doesn’t really tally does it? Why would they need to be fried by a cell phone tower when even if they owned a cell-phone – who would they call!

At least we are privileged in having education about the harm of electromagnetic radiation and protective tools emf-africa are available. These poor (in every sense of the word) Africans haven’t got a clue – or any of the benefits. As I said what a crazy, manipulative world.

Research proves that cancer and EMF, EMR are linked.

Be the first to comment “Cell phone towers in the African bush!- EMF and no cell-phones” Cancel reply