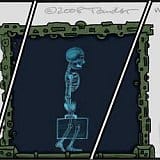 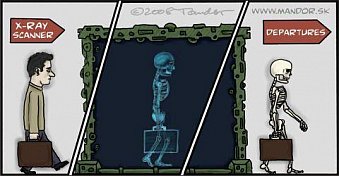 Travellers beware. X-ray body scanners used in airports that use “backscatter” technology were banned from 14th November 2011 by the European Commission so why are they still in use in the United States?.

This type of scanner project X-ray beams onto your body using ionizing radiation to create a detailed reflection of your body that is displayed on a monitor. This is viewed by an airport official – remotely! Doesn’t that give us a clue as to their safety?

Ionizing radiation causes DNA damage that can lead to cancer, and its effects are cumulative. So the more that you fly via a United States airport the more you increase you’re the risk to your health.

Ever since the machines were introduced, there has been a concern over both privacy and public health. This is why the European Commission’s decision to take a proactive stance by using alternative scanners to protect travellers health should raise the question as to why is the United States continuing to use machines that don’t offer the same health considerations.

The European Commission did not give specifics about the health dangers from using X-ray scanners but from this excerpt it is clear that they consider them unsafe.

“In order not to risk jeopardising citizens’ health and safety, only security scanners which do not use X-ray technology are added to the list of authorised methods for passenger screening at EU airports.”

So when your travels involves being in a United States airport, until they come to the same conclusion as Europe, you will be exposed to ionizing radiation from the X-ray scanners.

Until then is there an alternative route?

Be the first to comment “X-ray scanners banned by EU”