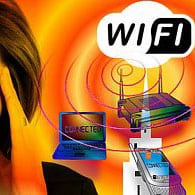 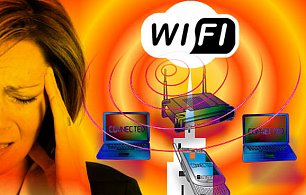 There are two components to a Wi-Fi router that can be hazardous to our health and well-being:

1)it is generating chaotic EMF signals and

2)It is broadcasting on a frequency close to that used by our bodies – so can “jam” us.

This is Murray Laird’s experience of the health effects from Wi-Fi:

“I have recently experienced two unpleasant situations relative to Wi-Fi. 1st situation was at my son’s house when he offed his i-pad for me to view an app. As soon as I brought the i-pad within close proximity to me I developed a headache. Conversely as soon as I gave the i-pad back the headache disappeared.

Note: I am not a person that has experienced many headaches in my life under normal conditions. The second circumstance was in the last couple of weeks in my own home. My sister had asked me to assist with a computer problem. I activated my Wi-Fi. At the same time, my daughter decided to use her i-pad to communicate with her partner in England. As I went to sort out my sister’s p.c. problem (laptop), I experienced a wave of nausea which made me totally unable to attend to her problem. I drove away from my house (leaving my son to attend to the p.c. problem), to attend to another matter. As I drove off, I wondered if I was well enough to drive, such was my feeling at the time. I recovered, returned home, had an instant headache upon entering my house which disappeared as soon as I turned off my Wi-Fi. The above situations are the worst that I have experienced but I usually feel uncomfortable in a Wi-Fi presence.

I have had a life exposed to electricity as an electrical contractor plus my early training was spent in high voltage situations. I am a trained building biologist who specializes in assisting people who are exposed to e.m.f emissions. It is possible that I have a greater sensitivity than most.

I work as an electronics technician in Hamilton. There is a massive build-up in the use of Wi-Fi on both the Hamilton campuses. At a meeting with electrical staff, last week. I outlined my experiences and requested that Wi-Fi be minimized in a new building to be constructed for the Schools of Trades and Engineering. As expected, a number of staff were skeptical although they are aware that I have knowledge in this area. I have demonstrated areas of concern to them and some have admitted that they can’t get electrical experiments to work correctly in these areas (what a surprise). The electrical manager has agreed to bring my concerns to the architects so hopefully someone will take notice.

Last year 2 students (22 & 25 years old) died of a heart attack and a 35 year old died of a brain tumour. All spent most of their day in a wireless environment in front of computers. One actually died on site while the other two died within two hours of leaving work. In another incident, my daughter’s partner, a computer technician, who spent most of his waking hours in front of a computer, died at age 36 from a heart attack. He was in reasonable physical shape and was about to engage in a ju jitsu lesson. Are these incidents just a coincidence?”

Thanks to Murray for sharing his expertise and experiences. It is people like him

Be the first to comment “Health risks with Wi-Fi”