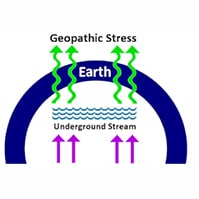 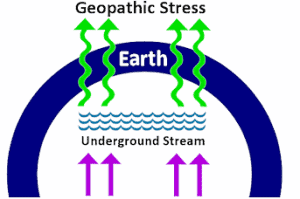 Geopathic stress is probably one of the most overlooked health hazards on our planet. We are educated about EMF (electromagnetic fields) and the dangers from cell phones, computers, microwaves, cell phone towers, Wi-Fi and high tension cables, but little is explained about natural EMF from underground activity.

What do you know about Geopathic stress? There I rest my case – thus far, but I will explain more.

Germany and Austria are switched on to it. Their government’s fund research on Geopathic stress. In Germany a report on Geopathic stress has to be done when buying a house. This makes complete sense and shows advanced thinking. In some schools children are moved at frequent intervals to avoid possible harmful effects.

Switzerland, France, the Netherlands, Belgium and Scandinavia are showing that they too are aware of the dangers of Geopathic stress.

So what is Geopathic stress? Geopathic stress is natural radiation that rises up through the earth and becomes distorted by weak electro-magnetic fields, created by subterranean running water, certain mineral concentrations, fault lines, and underground cavities.

We can’t overlook EMF even when talking about Geopathic stress however. Electro pathological energy created by modern technology such as high and low frequency energy from telecommunication towers, electricity pylons, transformers, radar and radio towers is a man-made contribution to Geopathic stress.

When the wavelengths of the natural radiation are disturbed by EMF they become harmful to living organisms. Geopathic zones have a range of influence from 2 to 200 feet, and reach a height of 600 to 30,000 feet.

German baron Gustav Freiherr von Pohl is generally acknowledged as the first person to do an evaluation of earth radiation when in 1929 he investigated why the village of Vilsbiburg suffered such high incidences of cancer.

An expert dowser, he used an arbitrary scale of 0 to 16 proposing that anything over 9 was a potential hazard. After marking all the danger zones he then checked the town hall records for everyone who had died of cancer in the village, finding that every person who had died of cancer had lived or slept over one of these radiation lines.

Because of scepticism von Pohl repeated the experiment in another town and the results were identical. Geopathic stress was now on the medical map.

It was in 1950 that The Hartmann grids were discovered by a German medical doctor Ernst Hartmann. These lines form a grid around the earth, running north to south, and east to west, extending to a height of 60 – 600 feet.

A Hartmann knot is where two Hartmann lines cross and harmful radiation is intensified at this juncture. Dr. Hartmann says that this is the worst place that a person can sleep or work

It is common to find the Geopathic zones parallel to, or superimposed upon these Hartmann grids.

“Long term exposure in combination with other types of energy such as Hartman lines, high electromagnetic fields or geological faults can give rise to optimistic abnormal cell growth and cancer. It has been known for a long time that when there is flowing water under a dwelling the inhabitants always feel more tired, are prone to premature aging and have a loss of vitality, more than those who sleep above neutral ground. While water running beneath a domestic dwelling should be avoided, a stream situated nearby and open to the sky will favourably discharge its negative energies harmlessly into the atmosphere”. Professor Dr. H Hubacek: Institute of Consumer Research Wien

The Vienna Report by the Institute of Consumer Research and Product Marketing in Vienna between September 1987 and December 1988 was research into the Biological Influences of Geopathic Locations.

The aim was to establish whether sites with Geopathic stress can produce statistically significant results to support the growing interest in the subject in European mainstream and alternative medical practices.

They found that test subjects subjected to Geopathic stress experienced:

The Vienna report stated that the “location effect” of the ‘disturbed zone’ on regulatory systems of the human organism is proven without doubt, but that the question of which subsystem or system the location-dependent powers primarily attack remains.

The research team consisting of distinguished professors, doctors, engineers, scientists and dowsers, also concluded that there was no evidence linking “location load” to any specific illness, but rather that it is a risk factor that weakens your body and immune system, and increases and reinforces the harmful effects of other pathogenic factors like:

So Are You Suffering From Geopathic Stress?

If you are or any of your family are suffering from any of these health problems it could be from Geopathic stress at home or work.

Try re-arranging your sleeping arrangements. If your health improves then you know that you are living in a Geopathic Zone and where you sleep will affect your health most as you spend long hours in bed.

If your health doesn’t improve try a p.e.bal or form of personal protection it will not only sort out your natural Geopathic stress it will protect you from man-made EMF as well.

This is just a note to express my delight with the P.e.bal device which I have in place at home to alleviate Geopathic Stress. Previously, I was routinely having to pay up to £100 a time to get my home dowsed and for the Earth Acupuncture procedure to control the negative energies about my property. Now, I am sleeping much better and experiencing greatly reduced gastric issues. And all this having made just one payment whereas before, I was shelling out so much on dowsing operations. Wonderful! Bob Pooley, UK
Tag: cancer, electrosensitivity, emf, radiation, stress
Share:
Prev

What are the EMF dangers of microwaves? Swiss government give warnings.

One thought on “What is Geopathic Stress, and are you suffering because of it?”