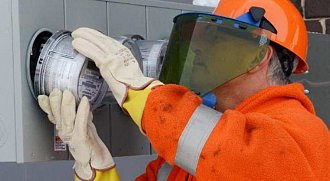 We have written a few blogs about these evil smart meters – installed against our will and spewing out radiation whilst collecting data about our habits for their corporate owners.

It is finally time for some good news: It seems that they are not serving the power companies either.

Canadian power company Hydro One is fed up with them not being able to send them data from rural areas in Ontario.

So they are giving up on them.

Yes, you read that right. The utility, which was ordered by its provincial masters to install the devices, admits it has decided to manually read roughly 36,000 meters instead of relying on the wireless technology.

Local MPP Randy Hillier, reported being deluged with complaints about Hydro One billing and smart-meter suspicions.

I’ve been banging my head against the wall for the last five years, saying we’ve got problems with smart meters in rural Ontario.” Since first being elected in 2007, no single issue has attracted as much attention in his riding, he said.

One of the main complaints concerns the terrain of rural Ontario causing connection failure.

“The evidence has been in front of us for a long time. It doesn’t work, it hasn’t worked and now (there’s) an admission that it will never work.”

Malfunctioning meters were among several issues that caused a customer relations nightmare for Hydro One in 2013 and 2014.

With the new smart meter-based system installed they tens of thousands of complaints. Some customers’ bills were double and tripled ; some had no bills for months; others were comically billed millions in overcharges.

Hydo One sent out over a million letters of apology to their customers.

So out with the smart meters! From now on the analogue meters will be read quarterly and bills in between will be based on estimates.

Although the source article* didn’t mention complaints about EMF emissions. From other research and feedback from our customers, you can be sure that these represented a significant proportion.

This amount of corporate egg-on -face, coupled with people waking up to the negative effects of these devices and starting to reclaim their power (see blog about…) , will eventually see them globally relegated to the recycling station (let’s be green here) where they belong.

Be the first to comment “Is this the beginning of the end for so-called Smart Meters?”