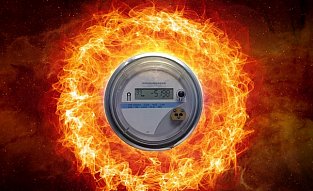 If you are aware about smart meters, then you will know they are a huge privacy violation. They are also not very safe, but mainstream media does not make you aware of this.

Smart meters have been spreading through homes and businesses for a few years now and power companies claim that despite monitoring your electric usage and sending the information via a Wi-Fi transmission, several times an hour, they are a lot more efficient.

They are also very dangerous, as Waverly Galbreath, a Kansas City, USA resident recently found out. Due to a smart meter malfunctioning and catching fire, it almost made his home in danger of burning down. He was away from home when it happened.

He told KSBH-TV “My neighbor called me and said my house was on fire. But when I arrived back I found that my smart meter had exploded”.

A spokeswoman from Kansas City Power and Light (KCP&L) stated that the incident was investigated by the company but added the excuse: “this doesn’t happen very often.” Chuck Caisley, Vice President of KCP&L added that over 700,000 meters had been installed by KCP&L and only “a handful of meter malfunctions” have occurred. KSBH-TV reported that multiple smart meter manufacturers and many different models are being used.

Galbreath was not the only victim, the models that are used by KCP&L have been very problematic all around the country.

Canadian electrician professor, Curtis Bennett said it is “a very dangerous issue” and that it should be considered a “real unprecedented emergency” no matter where you live. In his country, he has been in an ongoing legal battle over the use of smart meters.

He sent thermal images to KSBH-TV investigation reporters that showed a smart meter connection that was running far too hot and one that was operating normally. “You’ve got this plastic piece of junk on your property and that is actually what’s burning inside that meter base with the wires.”

“Out of the 700,000 meters fitted by KCP&L only half a dozen have had problems. But the company has had to send some smart meters back to the supplier because they overheated.

An insurance adjuster, Norman Lambe, in California said that he had investigated dozens of meter incidents and the primary cause was overheating. When they spark they produce too much heat during operation and the materials within the meters become flammable in the right heat conditions. He has over half a dozen smart meter fire claims that are ongoing.

It does not look as though there will be any improvement any time in the near future. Power companies in the USA are spending billions of dollars to install smart meters in all homes & businesses.

Whereas the old analogue dial meters have to be read, smart meters’ work by transmitting all our usage information quickly and effortlessly back to the power company. The data that is sent not only gives them the amount of electric we use, but also what time we wake, when we are not at home, if we have activity in the middle of the night and if we are not using any power due to being away for a prolonged time such as a vacation. All these hundreds of transmissions are part of what is causing the meters to overload stated Lambe.

Brian Thiesen, also Canadian has spent hundreds of hours over the past 5 years researching smart meters and has made a video about fires that have been caused by smart meters overheating.

Be the first to comment “Smart meters causing fires across America; facts swept under the rug by dishonest media.”