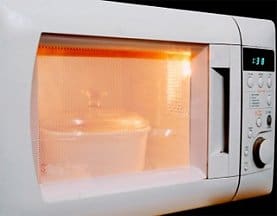 We disregard the health hazard caused by microwaves because of convenience. Scientific research proves that the dangers of microwave ovens include cancer through food conversion to carcinogens.

They are everywhere. Most homes have one. Chic cafes heat up your muffin or smoked salmon quiche in one. Take away joints use them. Motel rooms have them. The biggest (not counting cell phones) convenience of our modern age – Microwave ovens. How did microwaves get so big?

Well as it turns out it was the Nazis who actually invented these ovens. They were used in their mobile support calling them the ‘radiomissor’. These ovens were intended to be used for the invasion of Russia. If they used electronic equipment for preparation of meals on a mass scale, it meant that they didn’t need cooking fuels and could produce edible hot food very quickly.

It was after the war that the Allies discovered medical research done by the Germans on microwave ovens. These documents, along with some working microwave ovens, were transferred to the United States War Department and classified for reference and “further scientific investigation”.

The Russians also retrieved some microwave ovens and have since done thorough research on their biological effects. This resulted in the Soviet Union banning their use. The Soviets issued an international warning on the health hazards, both biological and environmental, of microwave ovens and similar frequency electronic devices.

This is a summary of the Russian investigations published by the Atlantis Rising Educational Center in Portland, Oregon:

Carcinogens (a substance that causes cancer) were formed in virtually all foods tested. No test food was subjected to more microwaving than necessary to accomplish the purpose, i.e., cooking, thawing, or heating to ensure sanitary ingestion.

* Microwaving milk and cereal grains converted some of their amino acids into carcinogens.

This doesn’t look good but what exactly does this do to our bodies?

* Eating food processed from a microwave oven causes permanent brain damage by “shorting out” electrical impulses in the brain.

* Male and female hormone production is shut down and/or altered by continually eating microwaved foods. This affects the sex drive and fertility.

* Minerals, vitamins, and nutrients of all microwaved food is reduced or altered so that the human body gets little or no benefit.

* The minerals in vegetables are altered into cancerous free-radicals when cooked in microwave ovens.

* Microwaved foods lose 60 to 90 percent of the vital-energy field and microwaving accelerates the structural disintegration of foods.

So in conclusion – microwaves cause cancer and other diseases. They destroy the goodness in our food and weaken our bodies.

Why, oh why then are we still using them? Is it worth ruining our health because of the convenience of a quick meal? Shouldn’t all microwaves have a government health warning like cigarettes ‘This machine will injure your health’ or even ‘This microwave will eventually kill you and those you love’

Still more facts if you aren’t convinced enough to have already put your microwave out for recycling.

We must not overlook EMF (Electromagnetic Frequency) emissions fro microwave ovens either. They add another health hazard into the dimension. All in all Microwave ovens are pretty disastrous – and – in more ways than one!

Is EMF radiation from your cell phone affecting you-more facts?

2 thoughts on “Microwave ovens were invented by the Nazis – Russia test the effects on health.”