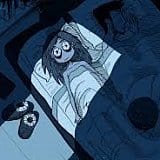 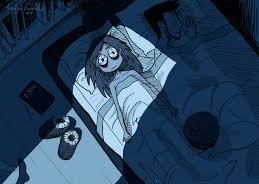 Insomnia can be as debilitating as any illness. Don’t ever underestimate it. It is only those that have never lain in bed waiting for sleep to come, despairing because they knew they would feel crappy next day, that do.

Sleep deprivation runs our body down so will cause illness eventually. And when we sleep is when we heal. Vicious circle. Insomnia is like being between a rock and a hard place, you can’t sleep which makes you feel lousy. Feeling lousy makes your life suck. It becomes a vicious circle that gains momentum.

Now I am not writing this for the minority who sleep as soon as their head touches the pillow. I have a husband and a lovely father-in-law, now passed, that can do just that. In fact, they can even drop off while at a party. It makes me so jealous, as a life-long insomniac I can only dream of easy sleep. This I am writing for all those who lay in bed waiting for evasive sleep, feeling that the whole world is slumbering – except them.

Electromagnetic radiation has played a big part in the insomnia epidemic we now have. There is no doubt about that, science has proved it. Messing about with our pituitary gland, EMF fools us into thinking that we are living in perpetual daylight which means we don’t make the Melatonin essential for sleep. And by the way, Melatonin helps prevent cancer, another modern epidemic.

But I digress a little. EMF sure has a lot to answer for. We at LED are old hands at it. So, EMF causing insomnia we have been addressing for fifteen years – very successfully.

EMF is an external cause, but what do we do to ourselves to stop us sleeping? Compulsive thinking. When our minds become overactive it is very difficult to switch them off. It is like when a program is not being broadcast a television displays white noise. When we go to bed we have stopped our day, the program has finished, but our minds are continuing with senseless white noise. It achieves nothing, often making absolutely no sense. But it is a great time to start worrying.

When waking up and starting the program again how often do you think ‘what on earth was that all about – totally pointless’. The bottom line is – over active brains stops us sleeping.

I’m a master at compulsive thinking. Things going around and round in my head. Needlessly. I drive myself mad with it. So, it is inevitable that at night my dog-with-a-bone mind won’t let thoughts go. Now I know that this is not what drove David to persist in his QSB invention, but it is a marvellous by-product, if so it can be called. As blood testing showed the QSB destresses the blood so there for the body – and obviously the mind as well.

To say that the QSB has been a bit of a saviour for me – and others – is a gross understatement, but then no one wants to be told that something works do they? The sceptic in most of us kicks in and says ’Oh yes – prove it”. Well I can’t. let’s be honest only you can prove something works for you. Talking about it won’t solve it, or convince anyone, only a good night’s sleep will do that.

With 30 days to try going to bed with the QSB running for as long as you want – to see what happens – you are the one that’s then proving that it works for you. With a, no quibble or questions asked, money back guarantee what is there to lose? Except a good night’s sleep!

Now who has got lots of spare cash these days?? Demands on our bank accounts are fierce and relentless. But then again what price would you put on sleeping – all night – every night. Waking up refreshed and ready to tackle the world and its brother. Most, like me, have probably spent a fortune anyway on herbal sleepers, music tapes, meditation tapes and every marketable insomnia cure. A waste of money because none worked, or we would be too busy sleeping to be reading about insomnia. In comparison the QSB has been a financially viable buy – because for me it works. Hurray at last.

Ps here is Debbie’s take on sleeping with the QSB:

“I mainly purchased a QSB for my insomnia, as I have major problems with sleeping. Has been a major issue in my life for many years. I have tried everything imaginable. Under recommendation, I have the QSB on a timer for when I go to bed for 70 minutes and again in the morning before I rise. The results happened on the first night. I now look forward to bedtime instead of dreading each evening. Had forgotten how a good night’s sleep felt. I am a different person already and its only been a week. Debbie, Waipu, New Zealand.

Be the first to comment “What can I do about insomnia?” Cancel reply