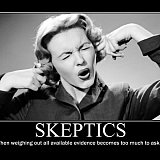 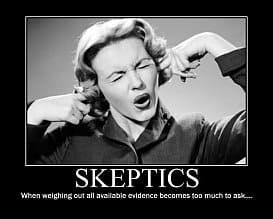 In this world as it is it is common sense to be a bit skeptical. If the email from Nigeria promises you riches then the delete button is always the best option.

In our business we deal with skeptics all the time. When a visitor turns away from our website because the technology we use is too “out there” relative to their belief system, then this is fair enough. The way people are waking and opening up these days they may well return in a few weeks, anyway.

What I have an issue with is professional skeptics, who feel the need to make sure that you are not tempted to stray outside their own belief systems.

Right now we are receiving a stream of complaints via the New Zealand Advertising Standards Authority (ASA) concerning our web pages. The complaints originate from the Society for Science Based Healthcare where one of their members has taken an interest in our company and has plenty of time to spare, obviously.

At the crux of the matter is that we have dared to say that EMF causes cancer – something that is now well researched to the point that even the WHO has said that cell phones are a class B carcinogen. To my disappointment the ASA resorted to dismissing all the studies I sent them – including the smoking gun research by New Zealand doctor Neil Cherry who connected EMF to melatonin reduction, immune system depletion, and cancer.

The ASA’s stance is that the New Zealand government’s position is that it is safe so this is where we stand.  I say God help us all if we rely on the government’s word for anything!

But here we stand, stuck in the official status quo – something that serves many corporate interests, as many reading this will be aware. In this way we are being retarded from the expansion and benefits offered by the new science – quantum physics, and the old science metaphysics (proving to be the same thing with different labels).

When the old science-based argument is used, what they mean is “Newtonian science”. This is the stuff most of us learned in school and is about solid lumps of matter relating to other solid lumps of matter in a predictable objective way. What they won’t tell you is that this is now largely redundant in light of many discoveries – some of them not so recent.

The many-time-repeated, famous double slit experiment proved that our consciousness has a measurable effect on matter. In fact, in the case of this experiment it determines whether light shows up in the form of a particle or wave (physicality or potentiality) when passed through slits in a barrier.

Now this smoking gun – fired so long ago should have been the kiss of death to “objective science”. How can you have anything objective when our very attention on an experiment has an effect on the result?

So the Universe is subjective. It is dependent on us being here to observe it. What we sense, feel, and perceive is everything!

So If someone says: “I feel sick standing near that wi-fi” this is a 100% valid and true statement and should be taken seriously – more so when a number of people report the same experience.

But you know this isn’t the case, right? This is “not scientific” and if the person making the statement is your child in school and you try and do something about it (unless you are very lucky), you will likely have a fight with someone keen to preserve the “science-based” status quo and dismiss junior’s experience as irrelevant or unrelated.

To my mind this highlights the really insidious thing about this evangelical skepticism is that proponents are so easily willing to dismiss human experience and, in doing so, their fellow human beings themselves. His or her version of reality trumps everything and anyone that disagrees is a fool to be pitied or ridiculed if the opportunity arises.

So I say stuff the status quo and let’s move forward together to a brave new world unfettered by governments and corporate agendas. A place where technology works for us and doesn’t kill us in the process, where everybody respects everybody else and shares the world’s resources so everybody has enough … I could go on but you know all about the world I am dreaming of. Oh, and we’ll bring the skeptics with us – kicking and screaming if necessary.

Be the first to comment “Skeptics – Guardians of the Status Quo.”