Chemtrails – poison from the sky 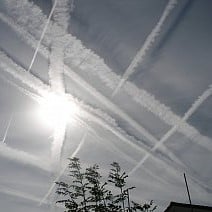 Have you ever looked up and seen the sky striped with what look like airplane contrails? Except they don’t behave like contrails because they hang around and spread out and are often laid in merging grid-patterns or crosses with the planes doing 180 degree turns to make them. These are known as chemtrails and are appearing all over the globe.

It wasn’t so long ago when this subject was well within the “conspiracy theory” department and people talking about it were treated like Chicken Little proclaiming the sky was falling. So many people have witnessed them first hand now that the subject is becoming “main stream” and being debated on prime time television news. Take a look at the segment below: 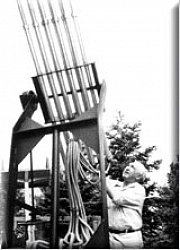 The theories for their purpose range from weather modification to mass chemical testing through to population control. Respiritory and stomach problems are regularly reported – often overwhelming local medical facilities after heavy chemtrail activity. While the governments deny anything is going on and all protests are met with a stonewall what can we do to protect ourselves. Well there are many people out there working with a variation of Wilhelm Reich’s cloudbusters to try and overcome this menace and take back some control.

Reich used long copper pipes to draw energy from the sky and alter the weather dynamics. He had many successes with this technology, breaking long-standing droughts. The modified cloudbusters have orgonite at the base of the pipes to convert any disturbed energy or DOR being drawn down from the sky. The theories behind their much-recorded success at clearing chemtrails is a little involved for this blog but the significant underground movement of “orgone warriors” employing chembusters in their back yards is testimony to the success of these devices.

Be the first to comment “Chemtrails – poison from the sky”