EMF radiation from cell phones is disputed – by the cell phone manufacturers! 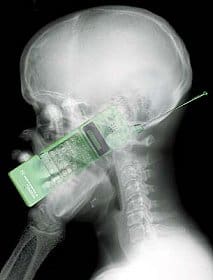 Research into harmful EMF radiation from cell phones and its affect on our health is ongoing and conclusive yet cell phone companies continue to claim that they are safe!

George Carlo, PhD, JD, an epidemiologist and medical scientist who, from 1993 to 1999, headed the first telecommunications industry-backed studies into the dangers of cell phone use. This program is still the largest in the history of the issue. He ran afoul of the very industry that hired him when his work revealed preventable health hazards associated with cell phone use.

Dr. Carlo has fought for years to educate the public on the truth about cell phone dangers. The cell telecommunication industry has been relentless in their campaign to discredit him and other scientists in the field.

The cellular phone industry which was born in the early 1980s, when communications technology that had been developed for the Department of Defense was put into commerce by companies focusing on profits. This group who had big ideas but limited resources, pressured government regulatory agencies—particularly the Food and Drug Administration (FDA)—to allow cell phones to be sold without pre-market testing!

The rationale, known as the “low power exclusion,” distinguished cell phones from dangerous microwave ovens based on the amount of power used to push the microwaves. At that time, the only health effect seen from microwaves involved high power strong enough to heat human tissue.

This pressure worked, and cell phones were exempted from any form of regulation. This exemption continues today. The popularity of the cell phones was instant and epidemic, but says Dr. George Carlo, “Those phones were slowly prompting a host of health problems.”

Today there are more than two billion cell phone users, including children, being exposed every day to the dangers of electromagnetic radiation (EMR)—dangers government regulators and the cell phone industry refuse to admit exist. Included are: genetic damage, brain dysfunction, brain tumors, and other conditions such as sleep disorders and headaches. The amount of time spent on the phone is irrelevant, according to Dr. Carlo, as the danger mechanism is triggered within seconds. Researchers say if there is a safe level of exposure to EMR, it’s so low that we can’t detect it.

There is no doubt that cell phone industry is fully aware of the dangers of EMF radiation from cell phones. In fact, so much scientific evidence exists that some companies’ service contracts prohibit suing the cell phone manufacturer or service provider, or joining a class action lawsuit.

Yet still the public is largely ignorant of the dangers, while the media regularly highlights new studies showing cell phones are completely safe to use. But as Dr. Carlo points out, “None of those studies can prove safety, no matter how well they’re conducted or who’s conducting them.”

Obviously there is a billion dollar industry with their own interests at heart. But what of the governments whose job it is supposedly to protect us? Shouldn’t they put a health warning on all cell phones? But then isn’t it the saga of the tobacco industry repeating itself?

Dangers of Cell Phone Use

Be the first to comment “EMF radiation from cell phones is disputed – by the cell phone manufacturers!”