How do crystals and gemstones form and can crystals heal? 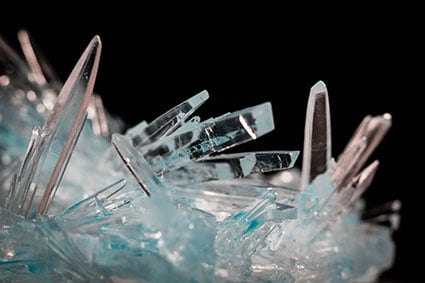 Crystals are gorgeous, they have been valued for thousands of years used mostly as jewellery, or amulets. Their beauty is obvious but how are these gorgeous precious and semi-precious stones formed? And how do crystals heal and balance our chakras?

Where do crystals form and what is the Earth’s crust? 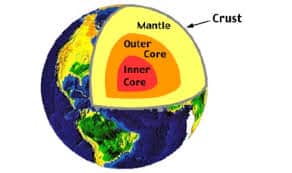 The earth began as a swirling cloud of gas from which was created a dense dust bowl. This contracted into a white-hot molten ball that gradually over eons formed a thin layer of molten material, magma, that cooled into a crust. The crust, equivalent to in thickness to the skin on an apple, covers the boiling, bubbling hot, mineral rich molten magna. It is in this bubbling pot that crystals form.

How are different types of crystals made? 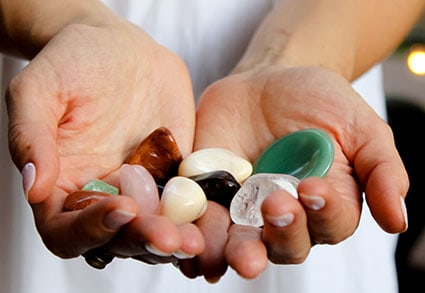 Some crystals like Quartz arise from the fiery gases and molten minerals deep at the centre of the Earth. They rise to the surface when they are super-heated. They are propelled by the stress caused by the movement of huge plates on the earths surface. As gases penetrate the Earths crust and meet solid rock they cool and solidify. This can take a very long time or happen relatively quickly.

If the process has been slow, or the crystal grows in a gas bubble it will be large. If the process is fast the crystals will be small. If the formation process is stop-start phantom or self-healed crystals are possible.  When the development of the crystal is extremely fast a glass-like substance such as Obsidian is formed.

Aventurine and Peridot  are created at high temperature from liquid magma.

Aragonite and Kunzite form when magma cools sufficiently for water vapour to condense into a mineral rich liquid. When this liquid penetrates fissures in the surrounding rocks it is able to cool slowly and lay down large crystals and geodes like Chalcedony and Amethyst.

Garnets form deep in the earth where minerals melt and recrystallize under intense pressure and enormous heat. These crystals are called metamorphic because they have undergone a chemical change that reorganises the original lattice.*

Calcite and other sedimentary crystals form from an erosion process. Rocks on the surface break down and mineralized water drips through rocks or travels as a river-lay down weathered material as new crystals. These crystals are often laid down in layers on a bedrock and are usually softer in nature.

Crystals are often found attached to the bedrock on which they formed. This bedrock is known as the matric.

What is a crystal  lattice? 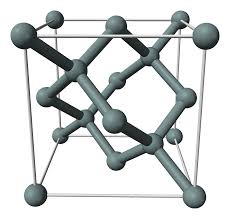 Something is crystalline if the atoms, ions or molecules that compose it are arranged in a regular way. This is called crystallography.

The atoms or groups of atoms are arranged into what is a highly ordered structure which  is three-dimensional. The crystal lattice is the symmetrical three-dimensional structural arrangements of the atoms, ions or molecules inside a crystalline solid (crystal) as points.

When the points are connected by lines, a crystal lattice is formed; the lattice is divided into a number of identical blocks, or unit cells, characteristic of the Bravais lattices.

In total there are seven crystal systems: triclinic, monoclinic, orthorhombic, tetragonal, trigonal, hexagonal, and cubic. A crystal family is determined by lattices and point groups.

Everything has its own vibration or frequency. This is why plants and minerals have been used for healing since the beginning of mankind. Each plant has an inherent vibration and every culture on this planet has used them for herbal and homeopathic healing.

This is also true of crystals who also have their own individual fundamental vibration. Plants and crystals are natures natural medicine and cures.

How does crystal healing work?

We too have a base frequency. When we have an emotional imbalance or di-ease this too has its own frequency. Certain crystals which have the same frequency as the imbalance, or a hormonic of it are able to establish a resonate relationship between the crystal and the imbalance which is then subtly destroyed.

As with all healing crystal healing also relies on intent. Our own intent. All healing is instigated by ‘Self’.

Crystals are also able to hold other frequencies implanted in them. The highest and most famously recognised healing frequencies are the Solfeggio Frequencies. When these are embedded in crystals their healing benefits are added to those inherent in the crystal.

We are finely engineered energetic beings with seven spinning energy centres. When these become blocked it means the energy isn’t flowing freely around our body and we can become sick physically, mentally and spiritually. Chakra balancing with crystals has been used for thousands of years to unblock and balance the chakras. Energy balancing technology can be used in conjunction with the crystals ensuring a deep and complete result.

“In a crystal we have clear evidence of the existence of a formative life principle, and though we cannot understand the life of a crystal, it is nonetheless a living being.” Nicola Tesla

Be the first to comment “How do crystals and gemstones form and can crystals heal?”