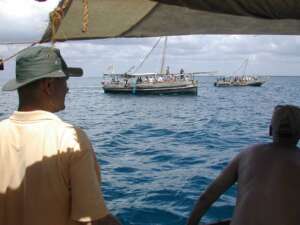 When a wholesale customer in Japan sent questions showing an interest in how and why we started our business here in New Zealand working with energy, I got to thinking that maybe other people might be curious too.

Some background about us:

David and I lived in Kenya for eleven years, which has no bearing on there being eleven questions! We sold everything we had in the UK and just went – naively. But it was an adventure that is easier to look back on maybe than it was to live some of the time. Would we do it again? Probably not. Knowledge makes you wary, like the old saying “fools go where wise men fear to tread”.

But we did have an adventure, which we wouldn’t have missed for the world.

After being in Kenya for about a year and seeing our bank balance going down at an alarming rate, we decided to start a business and earn some cash. We lived in a hut with no electric or running water and this is where ‘Dolphin Dhow’ was born.

Spending a chunk of our remaining money on commissioning an Arab sailing dhow to be built, which is a story in itself that you can hear later if you want, we threw ourselves in at the deep end. We were unaware of the corruption, deception, lies, and general lack of ethics needed to succeed. We were very green; some would say foolhardy.

Because we didn’t know that it was impossible – we did it. We went on to have three boats that took seventy-two passengers and five or six crew each. Our guests swam with dolphins, were fed breakfast, a three-course lunch, afternoon high tea and drinks including wine and beer throughout the day. We provided clean towels after their swims and a flushing toilet.

And all done without fresh water on tap, or electricity, back at base. Uniforms, towels, and general laundry was done daily by hand with cold water. Cooking was done on charcoal. We lived seventeens kilometers from the main road, in the bush of very rural Kenya that was magnificently beautiful. Nothing was – easy.

When the corruption became intolerable, we were shown a different direction. David had found Wilhelm Reich and Organite which he had been working with for some time and we were upped, and the way cleared for us to start afresh in New Zealand.

Questions from Japan about our work with negative energy.

We think everything of your story stated from Kenya. Why did you go to Kenya? What kind of work did you do?

We went to Kenya on holiday and loved it there so decided to sell our business in the UK. and move there. We started a tourist business taking people on traditional Arab sailing dhows to snorkel on the magnificent coral reefs and swim with the dolphins.

You said that your home in Kenya was a burial place for slaves. Why did you dig the foundation for your home?

We moved onto the site not knowing that it was an old burial site for slaves and naively started preparing to build and dig a well there. When we started digging, we exposed the bones in the burial pit where the bodies had been thrown. The local Africans, who were aware of the history, admitted to us that the bones were human and what they were. We were horrified but too financially committed to move away.

The site was considered unclean in Muslim terms and that is why it had remained a vacant lot and we were able to secure such a beautiful piece of land right on the beach.

We sent some of the bones to Nairobi Museum to be identified and the rest we reburied with a ceremony performed by the revered local African witch doctor.

You said that your home location was unpleasant. Did you feel that before digging the foundation? Have you ever found it easy to feel something?

Shimoni, where we lived, was the collection and shipping point for the Arab slave trade in the area and as energy sensitives, we were aware of the disturbed energy of the place, but this was where the dolphins swam and played so this was where we needed to set up our business. We had no idea that the site where we were going to live and run our business had such a macabre history until we discovered the skeletons. I started having night terrors when we moved onto the land, and we were getting physic attacks. To clear the energy was what inspired us to make our first devices. When we did the energy changed and the terrors and attacks stopped.

You mentioned that you found Dr. Wilhelm Reich’s work on the Internet. What year was it?

About thirty years ago.

What year was the first “device” you created?

At about, or just after the same time.

Is “device” like an Orgonite made by Dr. Wilhelm Reich? Specifically, what is it like? And what did you struggle with when you first made it?

It was hard to get the raw materials to make the devices. We added crystals which Reich did not include. These balance the energy passing through the devices.

How did you determine that the first “device” you created was effective?

As energy-sensitive people, we could feel it but other people that had no idea about it were aware of the changes too. People started talking about how the place felt different – better.

My night terrors and the psychic attacks we had been suffering stopped. We, and others, started sleeping and feeling better but we had no idea why. We have since learned the reasons.

Any energy that is disturbed and negative, which includes EMF needs to be brought back into positive balanced energy because everything, including ourselves, is made of energy. When any energy is out of balance – so too are we.

What kind of illness has increased to the local people since cell phone towers were built in Africa?

Cell phone towers were just being introduced when we left Kenya in 2003 so we were not around to see the effects, but friends have reported that they are the same as in every other country and continent.

How many “devices” were made in Kenya?

Tens not thousands probably. We did not make them to sell, we only gifted them. Raw materials to make them were very prohibitive. We already had a successful thriving business, so we were not looking at any other at that time. We were later led to do this in New Zealand.

Remote healing is listed on your site. Is it possible to connect with Japan and perform remote healing in the future? Can it handle multiple people at the same time?

Remote healing can reach anywhere on the planet and there is no limit to the number of people it can help.

Reading your story, we feel that your pursuit of health and happiness against electromagnetic waves has been guided by some other great force. Do you feel that way too?

We have been guided and led in everything we have done and do. We are merely the instruments being used by Divine intelligence to get out into the world what is needed at this time to ensure people are able to be as much as they truly are and can be. We, as is everyone, are creators alongside The Creator.

If we have tried to go in the wrong direction it has become so impossibly difficult, we have had to stop. If it has been the right direction, it has gone well and smoothly.

After more than twenty years in New Zealand where we started by making our own Orgonite devices and then touting them around the stunning new country we now called home, we made lots of contacts and friends and started to learn of the endless possibilities these little hand-crafted energy healing devices had.

A cure for Insomnia was the biggest reported benefit. And so, we gained knowledge. And then we tested. Firstly, in Canada with experts that approached us out of the blue and from nowhere. This is an illustration of how graciously we have been guided and taken care of on this journey. Then testing in India and here in New Zealand. All our testing is visible on our website as is our technology.

Over the years demand has grown, our products have become smaller, more powerful, and more efficient. EMF radiation which was mostly unknown and left field is now very much mainstream with more and more people being adversely affected by it. We have gathered hundreds of testimonials and have made as many new friends.

Over the last few years, we have been guided into making devices using scalar waves. Another but compatible direction. Our Quantum Scalar Boxes are used to de-stress and for self-healing. David has been intuited with another and very exciting extension of this. Watch this space!

In all honesty and humility, we can take no more credit for any of this other than being set on this path – and taking up the challenge. Putting as much hard work in making it happen as we could.

If we had ever asked the questions why, how, or can we? We would never have done it. Because we didn’t think we couldn’t- we just did. We, like us all, are co-creators alongside The Creator.

Can Emotions Make You Physically Sick?

3 thoughts on “11 Questions About Our Work With Negative Energy”