Overhead power cable-slow death from EMF, or burnt to death! 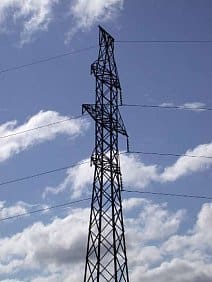 Overhead power cables are in the news again and not the usual stories about EMF/EMR (electromagnetic fields/radiation). That is an ongoing slow torture to our bodies. The latest news is more dramatic – instant death because of falling power cables in New Zealand and Australia. Both disasters occurring within days of each other.

A Transpower high voltage cable of 220k V fell on 15 homes in South Auckland New Zealand on 13th February. Mercifully no one was killed or injured. The cable remained live for some time. This caused scorch marks on the ground and to fences. In one place the grass caught fire(thank heaven for the heavy, Auckland rain)! Lucky escape?

A spokesman for Transpower, Mr. Devine, stated that it looked as though a joint in the centre of the span of cable may have failed. What! High voltage overhead power cables failing? How on earth could this have happened? EMF we are forced to live with but falling cables? Is human life so expendable?

Residents living under the power lines say that they are terrified but feel trapped in the situation – they would sell and move but can’t. Does it really take a cable falling for them to realize the danger they are in? EMF is a killer without the cable snapping and falling on their heads and homes. But then if the danger of cables crashing down scares them in a way that EMF/EMR radiation doesn’t I suppose some thing has been achieved from this terrible accident. A message has been delivered, albeit dramatically, that living under power lines is not safe.

What happened shortly before this, on the 8th February, in Australia was more disastrous and far-reaching. It caused death and destruction. 2 kilometers of high voltage cable fell in Victoria and added to the havoc of bush fires that killed 210 people and destroyed more than 1800 homes.

The Singapore owned power supplier, SP Ausnet, is being sued over this in a class action suit. And so they should be. But sadly there is only action when the outcome of danger is in your face, can no longer be hidden or ignored and some one has to be held responsible!

But what about the slow deaths caused by the EMF (electromagnetic frequency) from the power lines? These are happening consistently every single day. This is not occasional, news-worthy disaster. Who will take responsibly for this? Who will sue companies and governments over these slow deaths. EMF the perpetrator for the loss of quality of life because of illnesses, insomnia, broken down immune systems,electrosensitivity? Also the loss of mental health with depression, dementia, difficulty learning and remembering? Slow death. Who?

Who is going to say “enough” – living or working under over head power lines is dangerous because of EMF radiation and falling cables. Who is going to force an answer to the question “should there be overhead high voltage power cables at all?”

The Nu-Me pendant, p.e.bal and Negater shell will protect you from EMF but unfortunately can’t save you when those power lines fall!

Swine Flu epidemic – or bird flu, cow flu, any type of flu, and you

Be the first to comment “Overhead power cable-slow death from EMF, or burnt to death!”