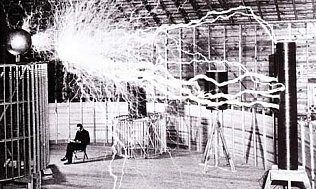 Nikola Tesla was a man way ahead of his time. His legacy included AC electricity, radio, fluorescent lights, remote control, robotics, laser, and the electric motor – and this list is far from complete.

Electro-Sensitivity seems to occur in people who experience prolonged periods of high exposure to EMF such as, in the case of U.K sculptress Margaret Lovell, buying a cordless phone and having long conversations with family overseas. (full story here: http://www.lifeenergysolutions.com/case-studies/). The body can take so much and then something seems to get pushed over the edge and tolerance goes down close to zero when modern life can become unbearable.

In the case of Tesla, it was reported in his biography written by his friend John O’Neill that he suffered greatly in his later years:

“To doctor’s he appeared at death’s door. The strange manifestations he exhibited attracted the attention of a renowned physician, who declared that medical science could do nothing to aid him. One of the symptoms of the illness was an acute sensitivity of all the sense-organs. His senses had always been extremely keen, but this sensitivity was now so tremendously exaggerated that the effects were a form of torture. The ticking of a watch three rooms away sounded like the beat of hammers on an anvil. The vibration of ordinary city traffic, when transmitted through a chair or bench, pounded through his body. It was necessary to place the legs of his bed on rubber pads to eliminate the vibrations. Ordinary speech sounded like thunderous pandemonium. The slightest touch had the mental effect of a tremendous blow. A beam of sunlight shining on him produced the effect of an internal explosion. In the dark he could sense an object at a distance of a dozen feet by a peculiar creepy sensation in his forehead. His whole body was constantly wracked by twitches and tremors. His pulse, he said, would vary from a few feeble throbs per minute to more than a hundred and fifty. Throughout this mysterious illness he was fighting with a powerful desire to recover his normal condition. “.

Nikola Tesla may well have been the first but, unfortunately, far from the last to develop this condition. We at Life Energy Designs have had many dealings with people suffering electro-sensitivity at various levels. Our products are able to help with many of the symptoms to make life bearable – but there is no known cure.

Globally, it is only Sweden who has recognized electro-sensitivity as a medical condition. If you are unlucky enough to be suffering electro-sensitivity then this is where you want to live as they have an elaborate support system to help you lead a normal life. Elsewhere your doctor will likely look at you over his / her glasses, write a prescription for some anti-depressants and write the word “psychotic” on your notes. Not what you want when you are suffering some real and profound symptoms.

So what about the rest of us? Well, Nikola Tesla subjected himself to extreme EMF exposure but today this would likely not be an unusual scenario. As 3G phone networks become 4G, now going into 5G,  SMART meters getting installed in every house and everything becoming wireless we are certainly moving beyond the 100 million times exposure levels compared to our grandparents.

In Sweden they estimate that around 2.5% of the population are suffering from Electro-sensitivity but how many people are connecting their symptoms to EMF exposure? Estimates suggest that globally around 50% of us have some level of Electro-sensitivity.

Right now, if you are aware enough to be reading this, then you would be well advised to educate yourself, limit exposure, and use protective tools to ensure that you stay the right side of these statistics. If you live or work in a high EMF environment, then treat this advice as URGENT!

Wishing you a low EMF day,

Be the first to comment “Electro-sensitivity and Nikola Tesla – The first case?” Cancel reply