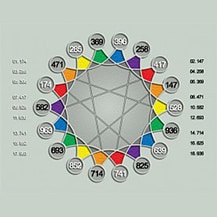 Solfeggio frequencies make up an ancient 6-tone scale used in sacred music – Gregorian Chants. The most famous of these is “The hymn to John the Baptist”. The special tones in these Gregorian chants brought about very effective healing. Each Solfeggio tone is comprised of a frequency that balances energy and keep the body, mind and spirit in perfect harmony.

The main six Solfeggio frequencies are:

The original Solfeggio scale was developed by a Benedictine monk, Guido d’Arezzo (c. 991 AD – c. 1050 AD). It was used for the monks to learn chants and songs more easily.

Pope Gregory The Great in his “wisdom” and wanting to control his people banned the Solfeggio scale from the monks repertoire and buried the details in the Vatican vaults where presumably they still reside.

It was thanks to Dr Joseph Puleo, a physician and America’s leading herbalist in the mid 70’s, that they have emerged and been used again. Dr Puleo found the six electro-magnetic sound frequencies in the bible. These corresponded to the syllables from the hymn to St. John the Baptist,.

So how were the Solfeggio frequencies discovered? Dr Joseph Puleo, a visionary was made aware by a vision of the Pythagorean method of numeral reduction to re-discover the solfeggio frequencies. By using this method, he discovered the pattern of six repeating codes in the Book of Numbers, Chapter 7, verses 12 through 83.

The Pythagorean method is simple reduction that turns big numbers into single digits.

It was in the Book of Numbers. In Chapter 7, verse 12 http://www.htmlbible.com/kjv20/B04C007.htm that Dr. Joseph Puleo found a reference to the first day. The second day was mentioned in verse 18, the third day in verse 24, and so forth until the final reference in verse 78 which is speaking of the twelfth day.

The Pythagorean reduction of these verse numbers is:

The repetition of 396 is the first Solfeggio frequency.

He found the next frequency by looking at verse 13, which is speaking of an offering. Six verses down, which is verse 19, the same offering or idea is repeated, six verses down at verse 25 there is another repeat, etc. Again by using the Pythagorean method of reduction he discovered a pattern. This next pattern is 417 which is the second frequency. Dr Puleo continued with this Pythagorean method until he discovered all of the Solfeggio tones.

The syllables used to denote the tones are: Ut, Re, Mi Fa, Sol, La. They were taken from the first stanza of the hymn to St. John the Baptist:

“In order that the slaves might resonate the miracles of your creations with loosened vocal chords. Wash the guilt from polluted lip. Saint John”

What are the meanings of each solfeggio tone?

“If you only knew the magnificence of the 3, 6 and 9, then you would hold a key to the universe”.

The 3, 6, and 9 are the fundamental root vibrations of the Solfeggio frequencies.

“Concerning matter, we have been all wrong. What we have called matter is energy, whose vibration has been so lowered as to be perceptible to the senses. There is no matter.”

Accepting that we are merely vibrating energy, as is everything opens up endless possibilities for us. For when that energy is vibrated at beneficial frequencies we can be lifted to realms beyond our imaginings.

Our Quantum scalar machine, affectionately called the QTB, presents the body directly with powerful Solfeggio frequencies. These frequencies are also embedded in Crystals that can not only heal us but help to connect us with The Source of all healing and all things.

What are the EMF dangers of microwaves? Swiss government give warnings.

One thought on “What are the Solfeggio frequencies?”