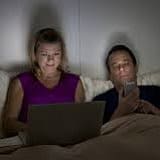 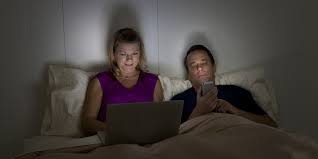 When I saw the headline “Is technology messing with your sleep” on the cover of Mindfood magazine, an upmarket publication for modern, mindful women I got excited. Was main stream media taking up the challenge of educating about Electromagnetic radiation – at last?

Now I rarely buy magazines but I added the Ten dollars to my grocery bill considering it a good investments if it was not just fashion, frippery, and food. Once home I made the traditional cuppa and sat down with my feet up to read and savour.

The article started slowly but I continued thinking that it would warm up. There was lots about sleep apps and monitoring sleep – really there is an app for that? But it said that they keep people awake because they want to keep checking the app. As I said before – really? Then it said that the apps worried people because they weren’t getting enough sleep. No surprises there, or information that I consider useful to insomniacs.

But then – ha – a glimmer of hope. The article went on to say that the habit of taking smart phones, laptops, tablets and TV’s into the bedroom is on the rise. Well – we all know this don’t we? Then some statistics about random parts of the world that seem far away, remote and nothing at all to do with us. Then a statement that screen time has negative effects on sleep. Yes – we seem to be getting warmer.

Yes, yes, yes. Light from screens of these devices (and other certain types of lights) can disrupt and suppress the release of sleep hormones such as melatonin. And it goes on to say that “melatonin plays a vital role in our sleep, wake cycles and the body’s 24 hour circadian rhythm.” This is getting good.

Oh no – now they are talking about using technology before going to bed. What about Melatonin – why was that cut off at the knees with only a partial explanation? Why not tell us the facts – truly educate their readers? Why not mention that technology produces EMF and that Electromagnetic radiations, like lights, stops the production of melatonin?

Also why avoid the fact that melatonin helps prevent cancer? So using our technology not only stops us sleeping it affects our health. Now cancer is not a nice topic we all must agree but avoiding mentioning it won’t make the subject go away and the information about it I am sure would be considered helpful to those that are having to face it in one way or another.

I digress. The facts are: Electromagnetic radiation fools the pineal gland that produces Melatonin only at night, into believing that it is eternal daylight. So no dark, no melatonin. The late Dr Neil Cherry did the research EMF/EMR Reduces Melatonin in Animals and People.

There is substantial and robust evidence that establish a causal relationship between electromagnetic fields and radiation reduced melatonin. Therefore there is a sound scientific basis for concluding that the melatonin mechanism is one of the established mechanisms between very serious health effects and acute and chronic exposure to electromagnetic fields and radiation. The natural signal, the Schumann Resonance signal, has a radio field intensity of about 0.1pW/cm2 and sleep disturbance was highly correlated (p<0.001) with exposure to the shortwave radio signal measured at 0.4nW/cm 2. Because sleep disturbance and melatonin reduction are causally linked to many other serious health effects, a public protection standard to reduce the incidence of these health effects would need to be somewhat less than 0.1nW/cm2.

Because of the extreme sensitivity of the brain electromagnetic fields and radiation and the reaction of reduced melatonin, a melatonin based bio indicator mechanism, such as sleep disturbance, can be a very useful tool or showing that electromagnetic signal is causing many other serious health effects, Read the whole report here

Maybe this is a step too far for Mindfood readers? Or maybe they would welcome the honesty in an otherwise fluffy article that doesn’t deliver on the exciting title “Is technology messing with your sleep” Are the Mindfood readers actually asleep – to what is happening around them. Let’s be honest there are a hell of a lot of people that don’t want to know the truth about the world they inhabit. But then there are a hell of a lot that do.

The article comes to a weak conclusion about someone (who I will not shame by name) that keeps checking her Facebook page on her smart phone throughout the night – this keeps her awake- or sleeping poorly. Well again no surprises there either! It does how ever makes me wonder why cell phones can possibly called smart. Or maybe the phones are smarter than their users?

By this time I must admit to being a little peed-off at spending ten dollars unnecessarily on a mag that was as fluffy as most. The added gloss didn’t even make up for the extra dollars it cost. So much for thinking that I was now part of an enlightened society – about EMF that is. My tea is long gone and the dregs stone cold, so do I make another cup to sooth my frustration – or as it is now six o’clock have a small glass of delicious glowing red wine. No guesses to where my preference lies.

Save your cat & How do cell phones give us cancer ?

Be the first to comment “How is technology messing with sleep?”