The Prison Of Beliefs 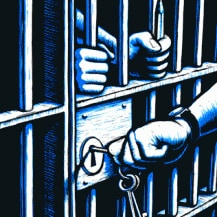 We human beings are like relentless warriors that constantly fight, almost to the death if necessary, to defend something that doesn’t even belong to us our belief systems.

Belief systems are like a box of tinted glasses handed down from our parents with instructions to look through a particular pair for a particular circumstance. Our box gets added to by the school system, our religions, and, GOD HELP US, the media but by a very young age our universe is pretty rigidly defined.

“The human mind is a lot like the human egg, and the human egg has a shut-off device. When one sperm gets in, it shuts down so the next one can’t get in. The human mind has a big tendency of the same sort.. ” Charlie Munger 1995.

Whenever something is presented to us in life for which we have a suitable pair of glasses to see great, it’s part of our universe and all is well in our garden. If an idea, event, or thing is presented that isn’t brought into focus by any of our glasses, our initial response is to ignore or deny it. The sword gets unsheathed just in case and a wary eye follows it until it goes off the radar.

But, if this renegade idea dares to stand right in our path and confront us. WOA! INTRUDER ALERT INTRUDER ALERT! Swords are now on guard ready to strike and, whether the intruder is a strange flavor of ice cream or an enlightened view of our cosmic connection, it’s toast! Unless

What if we are confronted by something way outside our belief system that is too big to ignore or deny and can’t easily be dispatched with a swipe of the rapier of denigration and ridicule. This is when something quite amazing and powerful happens: the whole belief system breaks down as all the glasses get spilled on the floor. This is chaotic and stressful when it’s happening but very much “short-term pain for long-term gain”. The gain comes when you are putting the glasses back in the box. This time you get to choose which ones are actually useful to you. Perhaps you might go out and by some shiny new pairs that will allow you to see the world in a whole new light. Perhaps some will get discarded as you see them as scratched and limiting your vision. Your universe has now expanded with many new and exciting possibilities.

Our devices have been known to do this for people. In these cases it usually requires a third party to introduce something like a p.e.bal into the life of the non-believer. This is because people will accept very high levels of suffering before they will orchestrate the challenging of their own belief systems! Quite often the p.ebal will be brought in by stealth in response to a specific measurable problem such as night terrors or insomnia. The problem goes away or is notably reduced in severity and then comes the great reveal with the corresponding belief system confrontation.

Now I am guessing that most people reading this are pretty open minded with nice expansive belief systems. But, what if I told you there is something predicted to take place on the world stage next month that will rock just about everybody’s universe?

Stay tuned for my next blog for all the details.

Be the first to comment “The Prison Of Beliefs”