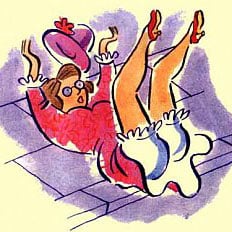 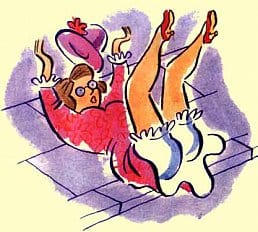 I fell flat on my back twice in a week. They were loosely related – sort of. But not because I am getting doddery or drinking too much. Statistically most accidents happen in the home, my first fall did. Drops of water from a rinsed out milk carton, being dumped in the refuse bin, caused a skating rink that had me skidding across the tiles. Hitting the fridge, scattering magnets and post it notes over my prostrate body, brought my backwards slide to a stop. My elbow got the full force.

I howled, partly from shame but mostly because of the excruciating pain. I was certain that I had a broken arm. I could move it and there was no swelling, well not much, so it seemed that the injury was minor. Or so David concluded – no x-ray was needed. Never the less it hurt like hell and stopped me from sleeping.

The Second was not as private. I should never have bought those fashion boots, but in my defence the tiles outside the ladies in the café were slippery. Dozens of eyes swivelled in my direction as my boots flew up in the air as if demanding to be admired. The rest of me fell heavily; yes you guessed it, onto my elbow. I blinked back the tears not wanting to make a further spectacle of myself but absolutely certain that the damage need to be assessed by an expert.

But no swelling and I could move my arm – sort of – so I continued to suffered the sleepless nights, and howl when I accidently touched It. I don’t suffer in silence.

This had all been going on for some time. The sympathy had run out. David was thoroughly fed up with my cries of pain and lack of focus from lack of sleep. And so life went on. Amongst all this elbow drama we were designing a new product, A Nu-Me protective device, with for kids in mind but loved by all the adults that have seen it. This is to be worn on the wrist like a watch or bracelet.

So being the number one guinea pig tester I put the prototype on my right wrist. Did I mention that my damaged elbow was right, and promptly forgot it? The next morning I woke up feeling great. I’d had a good night’s sleep. Why? It had been such a long time that I had slept well and was pain free. Pain free, it hit me like a brick or rather a cold, tile floor, my elbow felt much better.

It took a couple of days and more improvement before it dawned on me that the Nu-Me bracelet was making the difference. So I took it off. And the pain in my elbow returned. So I put it back on and the pain eased. Now I am not taking it off for anybody.

So watch this space for the unveiling and more news. For those that think bracelet – boring – you aint seen anything like this yet!

Be the first to comment “Slap strap saves the day”