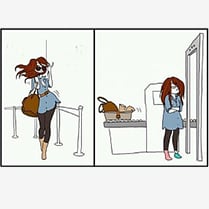 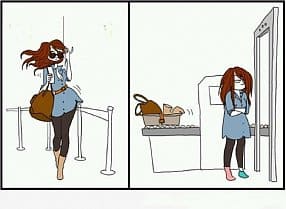 I used to enjoy flying. It was always part of the going away adventure. Now it is about queues, searches, and having to buy fresh drinking water at airport prices because you might “bomb” some-one with your own supply. It has all become a pain in the proverbial arse. Flying just isn’t fun anymore.

Australia may only be a short hop from New Zealand as far as travel is concerned. But it is still International. A rigmarole. So when we went recently I was prepared. No sharp objects. Liquids in a little plastic bag. No aerosols, inflammables or food. I confidently surrendered my hand luggage to the conveyor belts to be scrutinised by x-ray. I felt smug. All was well in my world I was sure.

When my once smart but now well used paisley hold-all went through the x-ray machine for the second time I wondered? When I was asked if it was my bag I knew. There was a problem. But I was still confident they were the ones making a mistake.

I was shown a small round image on the x-ray screen. I had no idea what it was and told them so. To this I was told that they needed to investigate. Now I started to sweat a little as the large airport security male plunged his hand in amongst my spare supply of knickers and sanitary ware. Not because he would find anything illegal but might wave my undies around in public.

With a flourish, mission accomplished, he held aloft my HOPE stone. His disappointment that it wasn’t some kind of terrorist devise was tangible, but added to that was the fact that he had no idea what it was and why some-one would carry a round pebble like object with HOPE engraved on it was beyond him! I suppose at that stage I was labelled as a bit of a loon – I didn’t care. My pants were not on general exhibition and my HOPE stone was saving me from all those massive amounts of electronic pollution in the airport and on the plane. Who was indeed the crazy one?

Return flight, no problem. I put my HOPE stone in the front pocket of my handbag intending to put it in the tray for pocket paraphernalia and cell phones to go through the x-ray. But low and behold that same tatty paisley bag was the subject of interest again.

“Have you got a spanner in this?” I was asked

“Certainly not” I replied with a puzzled laugh.

Were they barking mad? I can’t remember when I last used a spanner. In fact, I can’t ever remember using a spanner let alone carrying one.

“We’ll have to look” I was told

“Be my Guest” my bag had no underwear or anything remotely private.

This time the very beefy airport guy put on a rubber gauntlet type glove before he thrust his hand up to his elbow into the depth of my bag. Before I could assure him that there was nothing toxic or unsanitary in there he proudly waved a tiny, inferior, flat pack spanner in his rubber fist.

Thoughts raced through my head. I had never seen it before? It wasn’t mine? How on earth had it got there? It must have been there on the out ward journey in New Zealand? Why hadn’t their x-ray machine picked it up then?

“Assembling our bed when we moved, I told you to put it in your bag for safe keeping” David muttered to me. But that was years ago. It had lain in some crevice neglected and forgotten ever since, until airport security discovered it, and asked me what I wanted to do with it.

“Dispose of it” I said through gritted teeth.

David, bless him, did speak in my defence when he asked what possible harm could I have done with it? They told him all sorts. Well really? A not at all mechanical, slightly overweight, not very tall, woman of a certain age could dismantle an aircraft with a weak, flat pack spanner of a rare size?

Now I am all for safety, don’t get me wrong. But when people can freely carry on BOTTLES of duty free that could easily become lethal weapons, what are my eye brow tweezers, rescue remedy drops, handbag size hand sanitizer or flat pack spanner compared?

Now there is an epilogue to this story. forgot to take my HOPE stone out of my hand bag – and it sailed through the airport security x-ray machine without a problem. Undetected. So I have come to the conclusion it is like most things in life – just the luck of the draw!

Be the first to comment “Flying with HOPE” Cancel reply