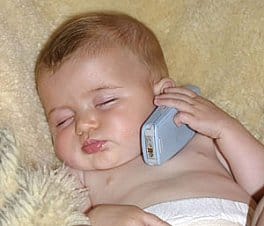 A second study has been made of almost 29,000 children by Professor Leeka Kheifets and colleagues investigating the possible relationship between a baby in the womb being exposed to mobile phone radiation and subsequent behaviour problems in the child by the time they are seven.

The type of behaviour in the child that the researchers asked mothers about were emotional or behaviour problems, inattention or hyperactivity. They were also interested in interactive difficulties with other children. The amount of time that mothers spent with their children was taken into account as maternal inattention has been known to result in behavioural problems in children, so this was allowed for in the study.

More children were exposed in the womb than the previous study published in 2008, and more of the seven-year-old children had their own mobile phone, though most did not use them for more than an hour a week.

“We are concerned that early exposure to cell phones could carry a risk, which, if real, would be of public health concern given the widespread use of the technology.”

Our children are the guinea pigs for the research that should have been done before this technology and its affects were put on the market!

Does Santa Have a Cell Phone?