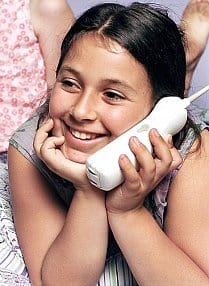 Cordless phones are more of a health risk to young people than mobiles, according to new university research.

The research, to be published in the Environmental Health journal, also found high users of cordless phones more commonly experienced tinnitus, a distressing condition of ringing in their ears.

In a separate study, Redmayne discovered year 7 and 8 students talked on cordless phones for far longer than on their mobiles, meaning the home line exposed them to the highest levels of EMF radiation.

“People are pretty poorly informed about how this technology works – many people don’t realise that cordless phones are actually cell phones. Modern cell phones use the lowest amount of power that they need to transmit, but a cordless phone always works on full power.” said Mary Redmayne.

Other research papers showed male fertility was also adversely affected, this time from carrying a cellphone in a pants pocket.

Ms Redmayne said governments and individuals should be paying attention. “There was certainly enough to be concerned about.”

Sophie Walker, of the National Centre for Radiation Science, who advises the Ministry of Health, said the latest research showed conclusively that radiofrequency radiation had an effect at the cellular level.

Until protection is built into our phones and devises have a look at our solution to this disturbing problem. RadiSafe phone protection shield