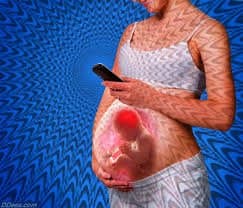 Links between cancer and cell phones have been talked about for many years but earlier this year researchers in Baltimore stated that the evidence is clear and the people more likely to be at risk are our children.

Cell phones have become a part of everyday life and an increase in health problems for children and infants means parents and expectant mothers have to be more aware of the risks.

At the Baltimore Convention Centre, the issue was taken on by both doctors and scientist from across the country. A connection between other health issues and exposure to cell phone radiation was found.

“The weight of the evidence is clear: cell phones do cause brain cancer. The young brain absorbs twice as much radiation as an adult”

Doctors say that even whilst in the womb the infant brain is especially vulnerable.

“Keep the phone away from the abdomen — especially toward the end of pregnancy,” said Dr. Davis

“There’s a correlation between cell phone use in pregnancy and behavioral problems in their children,” said Dr. Hugh Taylor, Yale School of Medicine.

“These devices are really stressing and straining our family relationships because the average mom or dad will check their phones 60 to 110 times a day,” said Dr. Catherine Steiner-Adair, clinical psychologist.

In the high tech world that we now live in effects cannot be avoided completely but we can cut down the risks.

Holding the phone away can lower the risk, even a few inches will help. The use of headsets is recommended when using your phone and keeping it as far away from you as possible when not in use.

“So we’re getting like a triple, quadruple whammy between the biological effect, the psychological effects and the brain waves effects,”

Help to fund research from the cell phone manufacturers and wireless providers is being called upon by The Environmental Health Trust.

Be the first to comment “New research confirms cell phones cause brain cancer and children are more at risk.”