Does Santa Have a Cell Phone? 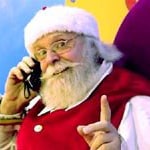 It’s been a while since Santa visited me (cue violins) but from what I remember he lives out 364 of his days a year in the frozen North (Lapland or the North Pole Somewhere?). Wherever he lives, it must be fairly remote and as a consequence far from a cell phone tower and any type of power grid.

So, if the answer to the title question is yes, then he probably only gets to use it on one day of the year (I assume he has a good roaming package with his provider). Herein lies a major problem and a real threat to the future of Christmas as we know it!

Santa is very likely to have a low tolerance to EMF! Yes, when you think about it he lives 99.726 % of his days outside the intensive murky soup of radiation that most of us have become somewhat accustomed to. On the face of it, this might seem as a recipe for good health. But EMF is like many toxins in that you can build up a tolerance to some degree. Poor old Santa can hardly be physiologically prepared for the energetic onslaught of December the 24th!

Bedrooms with computers left on – wireless modems humming their Mega Hertz tunes. Cell phones powered up next to the bed, awaiting a text from another similarly-placed phone as it beams out its energetic EMF smog. TVs and their UHF food filling the airwaves. Pylons humming with high-tension chaos… And then there is the EMF from his own phone- now probably busy with calls from his helper network about missing presents and other problems associated with mass distribution (population 7 billion and about 25% under 15 = about 1.75 billion kids divided by 2.4 average per household = 729 million house calls! In one night)

Poor old Santa! He must end up cooked like a Christmas Turkey and EMF-stressed to the hilt and it’s no wonder Rudolf’s nose glows red! He might have 364 days to get over it but it must be taking its toll on the old fella. How much longer can he go on like this? Christmas is clearly at risk!

I put a RadiSafe cell phone protector next to some milk and cookies last year in the hope I could help him out but, as I said, he doesn’t come around here no more 🙁 (something to do with my age??). He could certainly do with a Nu-Me as well which we would be happy to donate. So, if you see him ask him to make just one extra call, we have a present for him along with a glass of mulled wine (I learned he is actually lactose intolerant!).

Be the first to comment “Does Santa Have a Cell Phone?”