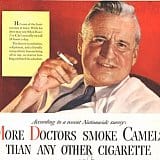 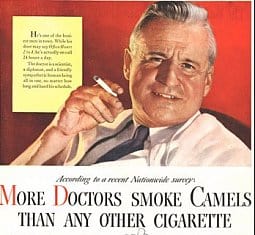 Are you old enough to remember the sequence of events that saw the fall of cigarettes from grace? (don’t answer that – I don’t need to know!) One minute we are seeing adverts about how many doctors prefer Camels (actually this was before my time) and the next minute the remaining smokers are huddled outside offices in the rain puffing away like exiled pariahs.

Now I don’t see people being shunned for using their cellphones in the near future but there are clearly some parallels as far as the health issues are concerned. The first warning voices about cigarettes were barely audible over the roar of interested-party denial. Each new health study added volume to the debate until now the dangers of smoking are black and white to see for all those who choose to heed or ignore them. This fact has allowed many class action law suits to be filed against the makers and promoters of tobacco products.

The process for cell phones is still pretty young but I predict a similar pattern being followed until, eventually, the technology is made safe for human consumption. The cell phone manufacturers and service providers know this is coming and many are putting clauses in their contracts barring customers from joining any class action suits.

I have put together some You Tube videos of people sharing a similar message. The first one is great for the kids to watch and offers great advice to reduce exposure. Don’t forget you can greatly reduce your cell phone radiation exposure by attaching a RadiSafe protector to your phones.