911 truth in the time of truth 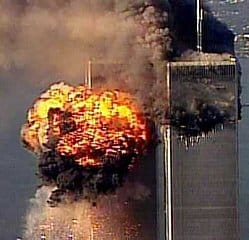 Over 1,000 architects and engineers have signed petition to reinvestigate 9-11 destruction
The fall of the twin towers on 9/11 2001 is a dark stain on the collective psyches of our age. It is also a big flashing neon sign to all that will read it that we are being perpetually lied to by the people we have empowered to run the world.

The dust had hardly settled in New york when the first dissenting voices started to point out that all was not right with the story that we were being told. If you listened and repeated these concerns at the time, chances are you would have been labeled as a conspiracy theorist (which everybody knows is some kind of an antisocial freak, right?).

A little over eight years down the road and things are changing fast. There are so many irregularities in the official story that anybody who looked at the facts could smell something fishier than a two week old herring. Recently Charlie Sheen came out and challenged President Obama to answer a list of questions about the events of that day. Here is a video detailing this:

Now a petition has been signed by over 1000 architects and engineers calling for a new investigation into the tragedy. They have concluded that the towers and building 7 (which wasn’t hit by an airplane) were all brought down by controlled demolition with some members concluding that as the buildings would have to have been expertly set with explosives (in conjunction with other irregularities) this was a clear indication of an “inside job”

The implications are overwhelmingly frightening to the uninitiated and nobody should blame the deniers for holding on to the official story. Are the people we have entrusted to run our country / the world really capable of snuffing out our lives to fulfill their agendas? Life can seem like a huge knitted quilt with somebody unpicking the corner and starting to pull!

I say we are in the age of truth so get ready! Truth is like a cork – you can push it under water for a while but someday it is coming to the surface. I can see many corks about to break through on a crashing wave. Get ready, stay open, and be prepared to find your own truth in some very interesting times on planet earth.